The heraldic arms illustrated above are those granted to an ACKHURST as described by Sir Bernard Burke in his "General Armoury of England, Scotland and Wales".

Note the acorns representing oak trees. The surname Akehurst has been said to be Old English (OE) derived from the term Oak Hurst, meaning an Oak wood or forest

Sir Bernard Burke in his "General Armoury of England, Scotland, Ireland and Wales", includes the following definition: "ACKHURST, or. On a bend as. three acorns, or. Crest - A demi lion ar. Holding in the dexter paw an acorn slipped vert fructed or."

This is the heraldic description of arms and bearings for an Ackhurst in days of long ago. It is written in heraldic styling which tells the artist what should be included in the rendering of the Arms. Each artist can take the same description and render it differently but the basic elements remain the same. What the description states is that the shield is silver, with a black Bend(stripe) running from the upper left corner to the lower right coloured black.

The three acorns are aligned on the stripe and coloured gold.

Above the shield is the Helm or helmet which by the direction it faces determines if the arms are those of a peer, royalty, or landed. Resting on the helm is the Torse which connects the mantle to the Helm. The colours of the Torse are the principal metal of the arms (silver) and the principal colour (black). The mantle is the flowing ribbons of fabric which can take elaborate twists and turns and in the same colours as the Torse.

The mantle is actually a representation of the robe worn over the armour in the crusades in the Holy Land. It was worn to keep the sun off the armour that could get more than a little warm in the desert sun. The ribbon effect of the mantling is to represent or depict the cuts in the robe inflicted by a sword in battle. The crest is that portion that rests on the Torse on the helm. Here it is described as a Demi lion or which means that only the upper portion of a silver lion (waist to head) is shown and in the left paw he holds a gold acorn with leaves that are green in colour.

However there are a number of things that can be learned about our A(c)(k)(e)hurst heritage from these arms. In the study of Genealogy, a knowledge about those of the name granted or matriculated arms can be helpful and offer some clues about the history of the name, if not the family. Because the original possessor of the name although unknown, was someone by the name of Ackhurst, it would indicate that the one of the oldest spellings of the name was most likely ACKHURST.

Names of course were spelled over the years by phonetics until the advent of dictionaries. Since the name does not appear in the Domesday Book, the owner of these arms must have lived during the period between the arrival of William the Conqueror in 1066, who brought with him the beginnings of Heraldic art to England and the formation of the College of Arms under Richard III on 2 March 1484.

After that date the names of those who received Arms were recorded by the college along with changes or differences for different individuals of the family or name who also were granted arms. The first time these arms were used for the base design of a matriculation by the College of Arms, was for a gentleman with the surname of Ackers. He was knighted at the end of the 19th century. Finally, because the helm is facing slightly to the right, we know that the owner was perhaps a landed or estate owner. He was somewhere in the social structure just below the peers, perhaps one of the "gentry" of the country. If he had been a Knight or one of the peers of the land, the Helm would be facing forward, with visor raised. 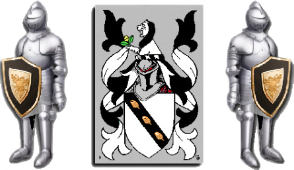